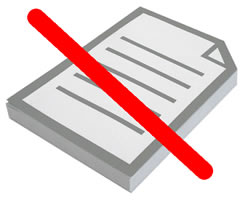 Rejected manuscripts always come back in pristine mint condition, don’t they? Coupled with a form rejection letter, it leads us paranoid writers to wonder, did the agent even read it?

I know they read far enough to know they didn’t want to read anymore. That could be ten pages in, five pages in, or maybe, they didn’t even get past page 1. So I started wondering, how far are my submissions getting before they’re axed? Damon Knight coined the term “The Red Line of Death” for the spot in the manuscript where he stopped reading. It could happen for any variety of reasons, but when the reader is done, they’re done.

I realized that my CPs and beta readers may not be able to gauge this. They’ve committed themselves to reading the entire section I’ve given them so they’ll keep reading past the rough spots. In this case, it’s kinder to be cruel and tell me: here the writing was too choppy, the pace got too slow, the characters became too stupid to live. This must be what agents really mean when they say “the writing didn’t grab me as much as I’d hoped”.

I believe that my writing doesn’t have to be flawless to be picked up. But it has to be engaging. It has to be readable. It has to keep the pages turning. So this is my new quest. I know my writing is flawed and it’s going to be flawed when I send it out, as hard as I try to polish it. Rather than aiming for perfect prose and technical perfection, I’m chasing the red line. I’m gathering up feedback, especially personalized rejections, and try to use them to gauge where is this line right now for me. It’s different for every agent for every manuscript of course.

When I was getting nothing but form rejections, I assumed I wasn’t getting past page 1. So I worked real hard at my first five pages (I even got the book :)). I also entered contests and paid attention to what people who didn’t love me were saying about the opening. I took every negative comment from a judge to heart. I know they say not to do that, but I do.

It was a long, long time and many rejections later before I started getting a couple of personalized rejections. Yes! I even got a couple of partial requests based off of sample pages. They all ended in rejection, but I sensed my line had inched forward a bit.

I finally received a couple of full requests. Not many, mind you! If the request was just off of a query, I know it says nothing about my red line, but if it was off a sample — yay! The line has moved farther, at least for that particular agent.

Even if someone reads through to the end, the story can still be rejected. But in that case, for a brief moment, my little story will have a fighting chance. I don’t know if Butterfly Swords has taken any editor or agent there yet, but hopefully one day, someone will reach “The End” with no red line in sight.