Blog Tour: Interview today at A Journey of Books where I say a couple things about the thought process that went into Butterfly Swords. Hopefully some are interesting. 🙂

Also at Book Junkies with an intervew and except for The Taming of Mei Lin. 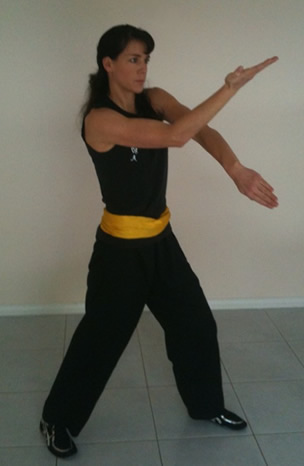 I met Mandy while studying Wing Chun under Sifu Eric Oram and Sifu Joe Sayah in Los Angeles. Mandy was a senior student then, while I was a white-sashed noob. I was always impressed with Mandy’s agility and precision during the training and sparring exercises, so I searched her out for Warrior Women month.

She graciously provided this interview along a few videos demonstrating the Butterfly Swords form and self defense techniques. Welcome Mandy!

Jeannie: What made you decide to start studying Wing Chun?
Mandy: I was a fan of martial arts films including Akira Kurosawa’s films, Sonny Chiba, and Bruce Lee. I always wanted to study an art for self defense and then I learned that Bruce Lee’s core art that he’d trained for 10 years before he left China was Wing Chun. Serendipitously Master Joe Sayah who’d learned from Grandmaster Cheung (the man who’d taught Bruce Lee along with his Sifu Yip Man) had moved from Australia to Los Angeles and opened up a Wing Chun academy ten minutes from my home. I did a class and was hooked at first pak sao punch!

Jeannie: It’s often said that Wing Chun is an ideal style for a woman. Can you expand on that?
Mandy: Wing Chun does not rely on force or strength to overpower an opponent instead using deflection, positioning, and pressure point striking to win a fight. Wing Chun is ideal for men, women, and children who may have to defend themselves against a bigger and stronger adversary. It’s easier to fight someone smaller than you but what if you are faced with someone twice your size or 2 or 3 attackers? Wing Chun gives you a fighting chance with it’s use of pressure point strikes to disable opponents and economical movement making it very effective and deceptive. It’s deceptive how powerful it is and because of the economical movements it’s hard to see what’s happening– it’s very fast!

Jeannie: Have you ever been in a situation where you’ve had to use your training?
Mandy: Only once in 2000 when I was on an overnight train in Europe did I have to pak sao (slap) a man’s wrist away who was attempting to harass and touch a woman I was traveling with. I told him to leave her the f*&k alone and gave him the look that said he was gonna cop it if he came next to us again and he left us alone. Prevention is the best medicine and with heightened awareness I’ve probably prevented myself being a victim of crime by not placing myself in a dangerous position. Otherwise, I’ve just applied my skills during sparring sessions or tournaments I’ve competed in. On 31st July, 2010, I took 1st place in the women’s division of a Loong Fu Pai Tournament in Victoria, Australia. And I’ve competed in full contact kickboxing tournaments over the last 2 years as well.

Jeannie: What would you say are the main ways kung fu has changed your life or your way of thinking?
Mandy: Practicing Wing Chun Kung Fu empowered me physically first which made me feel mentally stronger, safer, and more confident which carried over spiritually to give me greater peace and respect for myself and others. It really united the mind, body, and spirit in a positive way. When I want to master a kung fu technique first I have awareness of what I want then I try to master the technique through repetition which is hard work I have to do consistently in order to get the results I want. This is the same approach I use to achieve any goals in life see my book co-authored with Master Joe Sayah for more on this subject “Chi, Energy, & Prosperity”.

Jeannie: So….could a little gal actually take on a big strong guy like they show in the movies?
Mandy: If she knows Wing Chun or some martial arts then ‘yes, absolutely.’ If she doesn’t know how to fight at all then she’s got to ‘Stun and Run’ – attack the eyes and groin and get out of there. Watch for yourself in this short clip, groin kick, eye gouge, palm strike.

Jeannie: What would you say is your favorite fight scene from any movie? How realistic is it?
Mandy: Film ‘Return of the Dragon’ Bruce Lee vs. Chuck Norris in the coliseum in Rome, very realistic. The Bourne Identity – Bourne (Matt Damon) wakes up on park bench in Switzerland, disarms police of their weapons and puts them down – realistic if the person is a well-trained martial artist.

Jeannie: Who’s your favorite Warrior Woman?
Mandy: Well, if you think outside the film box you’ve got the Virgin Mary stepping on the devil (symbolized by snake, good defeating evil), and amazing saints like Joan of Arc, and also Mother Teresa and St. Mary Mackillop who were super strong women who cared for less fortunate people with love and compassion winning the battle over their own selfish wants or desires and putting others first in a materialistic world that tries to get you to ‘spoil’ yourself. In movies, I love JeeJa Yanin the star of Chocolate (2008 action film) and I’ve been a fan of Wonder Woman since I was a kid, she’s beautiful, strong, fearless, and she deflects bullets off her wrist bangles while wearing the best costume ever!

If you have any questions for Mandy, go ahead and fire away. I’ll let her know to stop by and answer.

I leave you with a clip of Sifu Joe Sayah demonstrating the butterfly swords form. The fluidity and speed of the techniques is what inspired me to use the swords in my debut book: