The cool thing about hanging with writers is sometimes you hear a concept when it’s barely more than a twinkle in someone’s eye. From the first moment I learned about Kate Pearce’s Tudor Vampires, I was hooked. It wasn’t a surprise at all when a publisher snatched it up — especially considering that Kate already had a strong historical romance fan base from her “Simply” series, which I’ve also followed.

I’ve always been intrigued by the stories of the wives of Henry VIII. Most particularly, the Tower of London ghost stories about the ones who were executed there. There’s enough passion, mystery, and yes, a bit of gore and horror, to keep anyone morbidly fascinated. So when I heard of Kate’s paranormal twist on the tale, I had one of those “why didn’t I think of that?” moments. 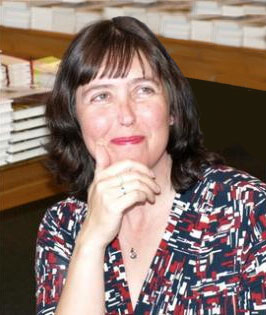 Before I go more into the Kiss of the Rose, I wanted to take the opportunity to say that Kate is one of those authors I aspire to emulate. She’s open, genuine, and friendly. Earnest about her craft and is successful simply because she keeps on writing the best book she can over and over. The rest seems to come naturally.

Kate gave me the best advice I heard at RWA conference this year. Since I’ve achieved PAN status (Published Author Network), I attended the PAN only workshops which were geared toward the business side of publishing. “It can drive you crazy,” Kate said, referring to the stream of depressing market news about lower sales and uncertainty in the wake of digital publishing. But she imparted her wisdom to me, “Just be nice to everyone.”

I think that’s the key and finally — advice that’s easy to follow. I’m going out at lunchtime to buy Kiss of the Rose, the first book in the Tudor Vampire chronicles which releases officially today. Kate Pearce never lets me down when it comes to compelling characters and fluid storytelling and I’m excited to see where she takes the story in her first historical paranormal.

The Tudor Vampire Chronicles: Kiss of the Rose 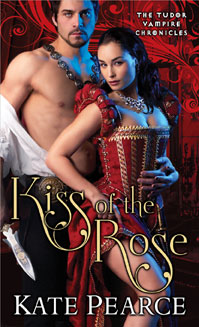 Desperate to defeat King Richard III and gain the English crown, Henry Tudor made a pact with the Druids that bound him and his heirs to the Druid’s deadly struggle against the Vampires. Ever since, the Llewellyns, an ancient Vampire slaying family, have been in the permanent employ of the monarchy.

Now Henry VIII is on the throne, and his father’s bargain has almost been forgotten. Until corpses drained of blood start turning up in the most inappropriate of places, including the king’s bedchamber. But are these people the victims of the Vampires-or of the Druids?

To save the king from a nameless assassin, Rosalind Llewellyn, Vampire hunter extraordinaire, must form an uneasy alliance with a known Druid slayer. Sir Christopher Ellis hails from a family that has protected the Vampires for centuries, yet Rosalind has no choice but to rely on his help. And with her life threatened and her loyalty tested, Rosalind may even have to acknowledge the unthinkable. This sworn enemy may be her soul mate.

CLICK HERE FOR MORE INFO AND TO READ EXCERPT