Two completely unrelated topics, of course. I’m over at Unusual Historicals discussing the movie adaptation of John Woo’s Red Cliff in light of the historical events of the Three Kingdoms Period.

On a more exciting note, I actually went out yesterday! I got dressed in something besides my workout clothes. I even wore heels. There were cocktails and those little hors d’oeuvres on little platters.

Oh, and I got to meet Susan Elizabeth Phillips and a roomful of her wonderful SEPPIES. Here’s me and Amanda Berry mugging it up with SEP and her new book Call Me Irresistable (of which I have an autographed copy!!) 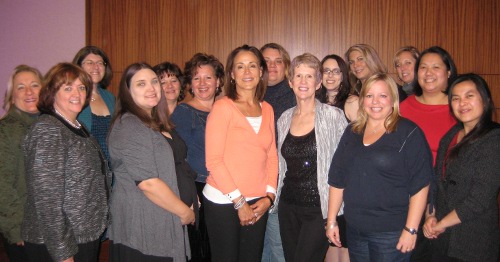 Turns out we had a full on dinner and not just cocktails. I learned that apparently it’s tacky to post food pics. Wha..wha…what?!? Those are my favorite pics on the Internet!

Of course, I learned this from Susan as we both pulled our cameras to take a picture of the dessert:

Ten minutes later, this dessert no longer existed in this world. It was “fight-off-the-wait-staff-so-I-could-scrape-the-plate” good. “How’s the diet going this week?” my trainer asked this morning. “Oh, awful,” I said proudly, as my thoughts strayed to this lovely little plate.

Here’s my tip: If you’re ever going to a Susan Elizabeth Phillips signing or event, bring the cute shoes because there’s a traditional “Shoe Shot”. My little gray Anne Kleins are nice, but didn’t photograph very well. I should have busted out the candy red Jessica Simpson Ruby Slippers, eh? (It is absolutely fair game to whip out the shoe just for the shoe shot.) 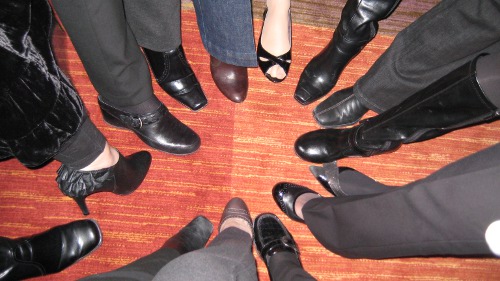 A really lovely night with a wonderful author and warm, friendly people. I laughed a lot, talked all sorts of books, and ate everything in sight.

Blog tour: Stephanie Draven interviews me on her blog. We exchanged interviews, how cute is that?

Also blogging at The Ron Empress about Surface culture vs. Deep culture in writing.

And I’m absolutely thrilled to be interviewed by Patricia Rice, one of my adopted writing mentors, on Word Wenches Monday. This is also where Mary Jo Putney hangs out. Mary Jo gave me an awesome cover quote and was the first author to put Wing Chun in romance in The China Bride. Please come by Monday and make me look like a cool kid amongst these bestselling ladies! Pretty please?!

I am quite thrilled to feature debut author Stephanie Draven on the blog today. Stephanie writes paranormal romance for Harlequin Nocturne and historical romance as Stephanie Dray. Her paranormal debut, Poisoned Kisses, releases on October 1st. Her historical debut, Lily of the Nile, recounts the story of Cleopatra’s daughter Selene and will be available January 2011.

I was first introduced to her writing through her Nocturne Bites, Midnight Medusa and Wild, Tethered, Bound where she weaves Greek mythology in seamlessly with relevant modern stories of war, survival, and the illuminating and healing power of love. Like the classic Greek myths, Stephanie Draven’s stories feature strong heroines facing hard decisions which make them a perfect addition to finish out Warrior Women month.

Thanks for having me on your blog, Jeannie!

Jeannie: One of the things that sets your Mythica stories apart is the focus on the Greek monsters as heroes. What inspired you to focus on the monsters versus the usual gods and heroes?
Stephanie: Gods and heroes are usually representations of the human ideal, and even though the Greek pantheon could be a squabbling dysfunctional family, they generally reflect what mere mortals aspire to be. Monsters, by contrast, represent our deepest, darkest, most primal fears. Not just our fears about the evil forces of the world that might do us harm, but also our fears about what evil might lurk beneath our own skin. For most people in our country, the last decade has been pretty rough. Fiction has become darker and darker as if to reassure folks that things could be even worse.

I also write pretty dark, but I like to use it as a vehicle to appeal to our better angels. You might be faced with monstrous circumstances and you may have even performed a monstrous act or two yourself, but that doesn’t have to define who you are, and it doesn’t mean a little bravery and a lot of love can’t transform your life. So I try to write about that.

Jeannie: What’s your favorite lesser known Greek myth and why?
Stephanie: I’m afraid this is going to make me sound very bloodthirsty, but my favorite lesser known myth is the story of the Danaids. They were the fifty daughters of Danaus who were forced to marry the fifty sons of their uncle Aegyptus. They were all very unwilling brides, and decided that they would each kill their husbands on the wedding night. When their new husbands came to ravish them, they would all have a dagger waiting. But one of the Danaids had a change of heart when her bridegroom approached her with loving gentleness and told her he wouldn’t take her virginity without her consent. By morning, forty-nine of the husbands were dead. It’s a gruesome tale that ends badly for just about everyone–the Danaids were cursed to carry jugs of water with holes in them, and the one sister who didn’t murder her husband was imprisoned–but its still a story about female self-determination and those were rare in Greek stories. It’s a story about women capable of protecting themselves and making their own choices, but also of showing compassion when treated with respect.

(Jeannie: Most Greek myths are pretty bloody aren’t they?)

Jeannie: How has your legal career shaped your approach to writing?
Stephanie: It made me work very hard at my writing so that I won’t ever have to practice law again…oh, uh, you had a different kind of answer in mind, I’ll bet. Okay, let me try again. I suppose the most obvious influence over my writing is that even though many of my heroes and heroines are vigilantes, the overall message of my stories have a serious law and order bent to them.

Jeannie: What made me sit up and notice immediately when reading your Nocturne Bites was your portrayal of the casualties of war and the complex journey of recovery and healing. I also noticed that you are involved with several charities for veterans. What drew you to this theme?
Stephanie: I’m of the opinion that you probably haven’t lived a very full life if you haven’t been dealt a few brutal emotional wounds along the way. We all suffer, we all struggle to heal from our own private tragedies, and I suspect that makes it easier for all of us to identify with the plight of soldiers who have suffered on our behalf. I have several veterans in my family, and I try to be sensitive and respectful to their sacrifices.

Jeannie: Dream “research” vacation. What is it?
Stephanie: Best question ever! Excuse me while I enjoy my little fantasy here…I want to spend a month in Italy walking through the ancient Roman ruins, having a picnic in the sun-drenched hills of Tuscany, frolicking in the sunflower fields, envisioning ancient life in the ashes of Pompeii. But those are all things I could actually do, given enough money. Less possible in the current climate is the month-long cruise down the Nile in Egypt I want to take. But maybe, some day…

Poisoned Kisses is in bookstores now as well as available from eHarlequin, Amazon, Borders, and Barnes & Noble. Having just finished this modern day story of an immortal nymph and a war-forged hydra, I can guarantee that anyone who loves strong heroines and heart-wrenching conflict will not be disappointed. I loved this story from start to finish and could not put it down. Learn more about Stephanie Draven at http://www.stephaniedraven.com.