But in the meantime, there’s more exciting news. To promote the release of THE LOTUS PALACE, Harlequin has made my novella, “Capturing the Silken Thief”, free on Amazon on B&N for two weeks! (From 8/25 to 9/7) 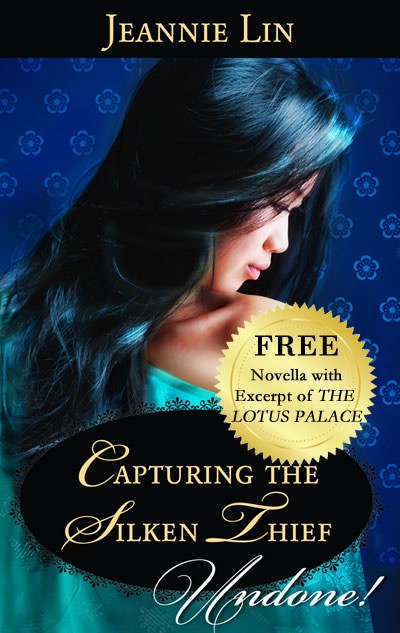 The pleasure quarter of the Pingkang li (also known as the North Hamlet) was first introduced in this story of crafty song girl, Jia, and the scholar Luo Cheng who becomes entangled in her schemes–as well as her heart.

You can download it from Amazon: http://amzn.to/1dAqm2t
Or Barnes & Noble: http://bit.ly/1cZtB4A

Hopefully this will be an engaging introduction to the world of the imperial capital and pique interest for THE LOTUS PALACE. Enjoy and spread the word!

Welcome to another Excerpt Monday!

Excerpt Monday was started by two lovely writers: Bria Quinlan and Alexia Reed. Visit the other links for some interesting reads from unpublished and published alike and if you’d like to join up for next month, take a look at the main site: The Excerpt Monday blog.

The Sorcerer’s Daughter is a historical fantasy centered around five swordsmen in the Emperor’s secret service who’ve been tasked with fighting demons and evil spirits. This is Book One in what I’m currently calling The Soul Stealers.

I had to admit some similarities to Tsui Hark’s Age of Vampires…but only on the surface. 🙂

Tai Shen sensed the sudden emptiness in the clearing. The gui were gone. He sheathed his sword to silence the lost souls that whirled around him. They fell away with a mournful sigh.

Song Yi lowered the ritual sword. Her hand trembled. “It was worse tonight.”

Her lips were pale. The mourning veil had fallen away to reveal a cascade of black hair tied back with a single ribbon. A moment ago she had been like a warrior goddess, but now Tai Shen only saw the girl, grieving and frightened. How had she faced these demons alone?

“Was that the leader?” she asked.

“Demons don’t have a leader.”

The stillness was unsettled. Once again, too quiet. As if the insects and birds and natural creatures of the night knew to stay away. Tai Shen swept his gaze over the woods. Something was wrong.

Jin approached, frowning. Like every expression from Jin, is spoke of a thousand thoughts behind it. “The guiguai all disappeared.”

“They never went away until dawn…” Song Yi’s voice trailed away. She rushed back to the cabin.

They reached the door to find her standing beside the bamboo mat. The talismans smoldered upon the walls. The mat lay empty.

She bowed her head. “I should never have left.”

A thin layer of sand had been laid over the floor. Taoist symbols were traced into the dirt, radiating outward like a spider’s web. A trail of footprints disrupted the markings.

One set led away from the mat. None led to it.

Song Yi grabbed the lantern, ignoring the swordsmen as the called after her. She would search the entire mountainside for Father if she had to. She would lay him to rest.

The smell of rotting meat tainted the air and her stomach lurched. The previous nights, she’d hidden away inside the cabin, praying that the talismans, the chanting, the mirror wards would hold the gui back. She’d considered that these beings were only waking nightmares, coming at night, living only in her mind. But they were real. She had seen how them swarm and attack. Had seen how the swords cut through them. Demon flesh melted into black sludge in the grass at her feet. She held her breath and pushed forward, but someone grabbed hold of her arm.

It was the one called Tai Shen. Up close, he seemed massive, foreboding. She tensed beneath the force of his grip. No one ever touched her like that.

“We need to get back inside,” he said. He appeared almost apologetic as she shook her arm free.

“Father is out there.”

The air churned like dark water around them and the unnatural hum in her ears grew louder until her head throbbed. A chill crept over her skin. He was right.

They escaped to the cabin, behind the talismans and mirror wards. Behind the screen of fragrant incense, meant to attract benevolent spirits. Tai Shen dragged the door shut and stood guard by the window.

He drew back the curtain with two fingers, sword still in hand. “I can see them.”

She and Father had lived in one room where all the humble necessities of life had been packed; furnace, bed mats, small, tight shelves that held their few belongings. The intrustion of the two strangers shrunk the space even smaller. A curtain could be drawn to separate the altar from the rest of the cabin. She wanted to do so now and block out the sight of the barren mat where her father had lain cold and still.

“I must go after him.” Her heart pounded and her palms grew damp around the wooden sword. Yet she forced herself to continue. “They’ll tear him apart.”

I haven’t screened all of these myself, so please heed the ratings. These excerpts may contain content not typical of my site.

Excerpts are posted at 9am EST at The Excerpt Monday blog.