Blog tour: I discuss setting as character as well as the concept of “jianghu” at the Romantic Times blog in their Around the World in Fiction feature. 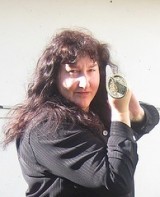 Today I’m very excited to welcome Linda Heenan to Warrior Women month. I found Linda while browsing sword fighting forums and was immediately struck by the fact that she had studied both Eastern and Western sword fighting techniques.  Her website, Chinese Swords Guide, is a treasure trove of information.

Linda teaches sword fighting seminars and is active in re-enactment groups. Despite her busy schedule, she generously agreed to be interviewed for Warrior Woman month. Welcome Linda!

Jeannie: What first drew you to swordfighting?
Linda: I’d never thought much about swords or any kind of martial arts until my children were in highschool. Then, one day, I was walking through the local markets and spotted a stall with swords for sale. I asked to look at one. It was only a cheap wallhanger but I didn’t know that then. As I held it, something seemed to grip me. It sounds weird, and I’m definitely not a person who goes in for weirdness, but I’d have to say the sword called to me. I knew in that moment I had a decision to make – either learn to use one properly, or never touch a sword again.

Later that week, I did an internet search on sword related subjects. What interested me most was a writer’s website. The roleplayers were writing a swordfight move by move. This seemed quite harmless, and a good way to get started. So I joined the site and began learning enough to write swordsmanship scenes. In the process, I met some writers who were into real swordsmanship and other martial arts. My character began to write jian swordsmanship at the suggestion of one of those writers. Then, two of them suggested I read teacher Scott Rodell’s book and get his DVD, to make my writing more authentic. I did this and liked what I saw so much, I decided to contact the author. I found him on a forum and expressed my interest in his style of swordsmanship. To cut a long story short, he became my teacher and fourteen months later, i met him at a seminar I’d organised for him in Australia.

Jeannie: How many different styles have you studied?
Linda: I’ve studied three Chinese sword styles – jian, dao and miaodao, with Sifu Rodell. I’ve also trained in highlander broadsword, German and English longsword, with Paul Wagner. I’ve touched on several other Europenan styles and a lesson or two in Japanese. I also regularly meet with a 12th century reenactment group. 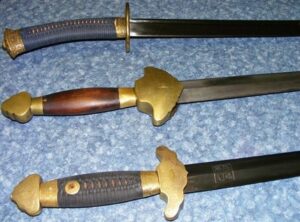 Jeannie: What would you consider the primary differences between Western and Eastern swordfighting?
Linda: There are more similarities than differences. Many sword strikes are the same with similar swords from the West or East. This is not surprising. There are only so many ways you can use a sword. Chinese swordsmanship has some very clear differences in the way the body moves. While many styles from Europe and Asia use whole body movements, the Chinese styles are based in internal martial arts. The movements do not come purely from muscular action combined with stepping, as they do in so many styles. They follow taiji principles. This is why so many Asian sword styles are part of a complete martial arts system passed down from teacher to student in unbroken lineages. The empty hand skills flow on into the weapons training. In Chinese swordsmanship, all movements flow from the weighted leg, are directed through the waist, and out through the sword. It’s like turning on a hose. The movements flow with minimal muscular effort.

Jeannie: What would you say are the main ways studying the sword has changed your life or your way of thinking?
Linda: Any martial art challenges discipline, character and determination. I was good at almost everything I tried, as a child. I was top of my class, always winning things, and believed i could acheive anything I wanted to in life. When I took up swordsmanship in mid life, I was not very good at it. I had to work hard and practise a lot. Also, I had the attention of a teacher for the first time in my life. At school, when you’re top of the class, the teacher leaves you to it, or uses you as an assistant, while spending all his time with the children who need help. So I flew under the radar. No one ever challenged me. When I began learning sword, that all changed. Suddenly everything was being scrutinised. I had to use a lot of determination to learn, put up with being a slower student and work very hard.

I also lost quite a lot of weight, regained flexibility, and improved my health. I’ve always been a person who thinks nothing is impossible if you really want to achieve it. Through doing sword, I’ve realised that is usually true. Sometimes the reality is, you can only go to your own best level. I’ve learnt that my best is worth enjoying and anyone can use a little to achieve a lot in life.

Jeannie: Let’s talk swords for a moment. They always like to compare weapons from different cultures in shows like Deadliest Warrior. I know the effectiveness of the sword depends on the its purpose and function, but what would you say is the ultimate sword? East or West?
Linda: There really is no ultimate sword. The best sword is the best one for the job and the one the swordsman has the best control over. There is almost a cult following for the katana, for example, but a Chinese swordsman will nimbly step out of the way of a huge katana strike and come back with a simple cut to the top of the arm while the other sword is out of the way. I know. I did that to a 30 year trained katana swordsman when I was a two year beginner. Then he got angry and cracked a bone in my arm.

There is no best sword, only best swordsmen. If a swordsman can stay calm and in control, they win the fight, no matter which sword they are using as long as it is appropriate to the time. For example, when plate armour became common, slashing swords were of little use. Thrusting swords, solid, stiff, and pointed, almost like stakes, were the only things that could penetrate the armour. There are good swords for horseback battle, for formation fighting, and for individual battle. No sword can do everything.

Jeannie: In your opinion, what’s the best sword for an average woman who’s not that brawny?
Linda: It is usually best for for a woman to choose a lighter sword – under a kilo. Men are a lot more muscular and can work with heavy swords more easily. If a woman is small and light, she might take advantage of the quick movements used with a rapier. I chose the jian. It is light enough to wield easily, good for both cutting and thrusting, and extremely versatile. 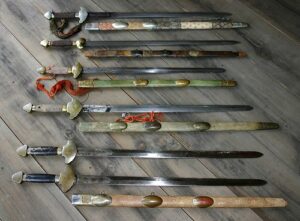 Jeannie: So….could a little gal actually take on a big strong guy like they show in the movies?
Linda: Yes. A well trained woman with the right sword in her hand could definitely get the best of a man in a sword fight. Since she probably has less height and shorter arms, she would be best using a one handed sword and using her flexibility and speed. It has a lot to do with anticipating the move before it comes. In jian swordsmanship we use expressions such as he moves first but I arrive first. You have to use all of your senses to know what is coming, while at the same time, not committing to any particular strike until your opponent has committed to something that will take him momentarily out of the way. The harder he strikes, the longer it is to come back from the momentum. A good swordswoman lets the theif in the doof, so to speak, and then voids, leading the strike into emptyness, creating a hollow to attack.

Jeannie: What would you say is your favorite sword fight scene from any movie? How realistic is it?
Linda: I love the first fight in Crouching Tiger, Hidden Dragon because there is so much action. Of course, it’s not realistic. It’s almost magical. However, it does show off the athletic ability and speed of Chinese swordsmanship, and it does use my favourite sword. Although many movie swordfights are choreographed, there still has to be a lot of training and skill behind the movements.

Jeannie: Who’s your favorite Warrior Woman?
Linda: Fu Hao, of the Shang Dynasty, stands out as a woman who achieved more than most. She rose above the accepted station of women to become a general in the early Chinese army. She led successful campaigns against attacking tribes, cared for her warriors and was a priestess of her day – another role usually left to men. The warriors and politicians of the Shang recognised her with the highest possible honour, burying her with over a hundred weapons. Among them, four battle axes, the symbol of greatest military prowess. Even after all this time, she is an inspiration to any women who think they still live in a man’s world. We really can be what we want to be.

Jeannie: Thank you Linda! I’ve learned so much more (and have so many more ideas for my stories) just from reading this interview. Leave any questions or comments and I’m sure Linda will respond when she has time.

In the meantime, this isn’t the first sword fight from Crouching Tiger, but it gives you a good view of the swords. Zhang Ziyi’s Green Destiny is an example of jian where Michelle’s double swords are an example of dao.