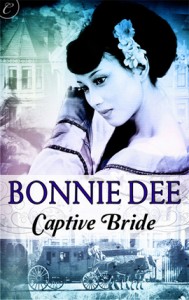 Huiann arrives in America expecting to be wed to a wealthy businessman. She no sooner disembarks from the ship than she realizes Xie is not looking for a bride: Huiann is worth more to him as a high-end prostitute. Though her fate is better than that of other Chinese women forced into the sex trade, she has no intention of waiting for Xie to sell her virginity to the highest bidder. At the first opportunity, she escapes and disappears into the city.

When a beautiful woman takes refuge in his store, Alan’s life changes forever. He’s spent the last five years trying to forget the horrors of war, and had almost given up hope of finding love. He hires Huiann as his housekeeper, and though they can only communicate through signs and sketches, they quickly form a bond that transcends the need for words.

But Xie is determined to recover his property, and love may not be enough to protect Huiann from his vengeance.

I was excited to see a new historical romance featuring a Chinese heroine so I pushed it right up to the top of my TBR pile. It’s release date is February 14 (today) so I haven’t had a chance to read it yet, but I’ve already pre-ordered it for my Kindle. I’ve read other stories by Bonnie Dee so I’m looking forward to a well-written tale.

Bonnie was nice enough to answer a few questions about the story to whet your appetite. I think you can see from the interview how much thought went into this story and I can’t wait for Whispernet to deliver it into my Kindle!

Jeannie: We all hear how Asian characters and interracial relationships are a  hard sell. Can you describe the publication journey for Captive Bride?
Bonnie: I jotted down the idea for Captive Bride about five years ago but didn’t pursue the story right away since I had other projects to work on. After I finally opened the file and dove in, I couldn’t stop writing. When the manuscript was finished, I sent it to agents and publishers. After waiting eons for responses, I heard from Harlequin Historicals. They loved the premise but wanted some deep changes in order for Chinese Bride, as it was called then, to fit into the Historicals line. The primary one—which changed everything—was that Huiann should come into the relationship able to speak English. They didn’t think readers would buy a couple who could barely communicate falling in love. I made the requested changes and sent it back. Ultimately, as much as the HQ editor loved the story, she decided it wasn’t really a good fit for their category romance line. I changed the story back to my original vision in which language was a huge hurdle for the couple and sent the manuscript to my Carina Press editor. Carina accepted the story for publication and after doing some more in-depth work under the excellent guidance of my editor, Deb Nemeth, the manuscript was finally finished.

Jeannie: What drew you to this setting and these characters?
Bonnie: The story idea came to me one night on a vacation as I lay in bed in a cabin in the woods listening to night noises and telling myself a story to get back to sleep. Many of my story ideas hatch during that time between wakefulness and sleep when the subconscious is uppermost. At the time I was reading a contemporary romance called The Dowry Bride about an Indian woman who escapes a loveless, dangerous marriage and falls in love with someone else. It wasn’t cross-cultural since her lover was also Indian, but I think that may have been the germ that sparked my story. I’ve always been a huge fan of lovers crossing socio-economic barriers (Cinderella much?). Cultural barriers are another big chasm and one that can be used in modern as well as historical romances.

The character of Huiann came first. It’s her story. She’s probably the more vivid of the two characters. At first the hero was merely a foil for her, but then Alan took on a personality beyond “rescuer” as I embroidered him a tragic back story and his own demons to overcome.

Side note: After I was finished with my manuscript, I saw a movie called Thousand Pieces of Gold and while I loved it, I was upset to see a lot of my ideas in the story (Including the hero having suffered through Andersonville. What are the odds?) So I want to state that I invented my facts all on my own and to recommend putting this great movie in your Netflix queue. You can also see it on Youtube if you don’t mind watching in pieces.

Jeannie: Describe some of your research for the book. Can you give us one fascinating tidbit of trivia you found out?
Bonnie: Wikipedia is my friend, and the internet in general. There was a site at which I picked names for the Chinese characters and learned their meanings. I looked up information about the steamship routes between China and San Francisco during the time period and other info about the layout of steamships. I read about San Franciscan history and particularly the history of the Chinese in San Francisco. I looked up facts about Andersonville prison where Alan spent most of his time during the Civil War. I found a site with Chinese proverbs Huiann’s Grandma Mei could spout, but I invented the folk tales Huiann uses throughout the book to illustrate points.

Interesting fact: Chinese dragons represent the male principle and the phoenix, fenghuang, represents the female principle as well as virtue and grace. I was playing with that symbolism in the book and made a reference to the phoenix rising from the ashes. But when I read more carefully, I learned that’s a Western vision of the phoenix. The Chinese version has nothing to do with that image of resurrection so I had to strike that part. (Jeannie: Good catch! Yes, Chinese dragons and phoenixes have quite a different connotation than western ones.)

Jeannie: I’ve noticed a theme of communication barriers in your books. In A Hearing Heart, your hero is deaf and mute and In Jungle Heat, your M/M retelling of the Tarzan tale, has two protagonists who have to learn how to communicate with one another. In Captive Bride, once again you have a language and cultural barrier between your hero and heroine. What about this setup intrigues you and what were some of the challenges you faced while writing the communication in the story?
Bonnie: In the romance world, there are a lot of stories centered on soul mates. In real life, I think it’s foolish to imagine there’s only One True Love for every person. Come on. It’s a huge world and there are hundreds of people you could have a perfectly acceptable and adequate lifelong relationship with. But when it comes to reading about romance, there’s something deeply satisfying about the idea of looking into a person’s eyes and feeling like they “get you” on a fundamental level. I suppose everyone’s searching for that sense of deep connection.

When I watch movies or shows, I love how the actors communicate so much beyond the lines they’re given. To me, eyes are the sexiest body part. I love to read (or write) about a couple that feels an instant attraction then struggles to find words to communicate their thoughts and feelings and to learn more about each other. Nothing’s more interesting to me than that journey.

Jeannie: Finally, you have so many stories in so many different genres. How do you decide what to work on next? What’s your next release after Captive Bride
Bonnie: As ideas come to me, I jot them down and put them in the Ideas folder. When I have time, I get back to them, pick an idea that inspires me and work on it. I would warn new writers that writing in multiple genres is probably not the best way to go. People like to know what to expect from an author—thus the term “author branding”. I’d probably be a lot farther along in my career if I’d decided to be one thing and then stuck to it. Also, people love a series so it’s really great if you can create one world readers can visit again and again, peopled by interconnected characters.

Unfortunately, even when I try to write a sequel, it doesn’t really work out. After the success of my zombie novel, After the End, some readers were asking for a sequel. Instead of giving them what they wanted—more about the characters in the first book and what happened to them after escaping Manhattan—I found myself writing an entirely new cast and location. The only connection is that it’s set in the same apocalyptic future. Also, Dead Country is written in first person which some people hate. Why did I shoot myself in the foot when I had the opportunity to capitalize on a good thing and keep moving forward with that? I guess I just get bored easily. When something is over, it’s over and I want to move on to a new project, not revisit the same place and people.

My next release on March 1 is Vampires’ Consort from Samhain. It’s a continuation of my Magical Menage series. And here’s another example of a series that isn’t really a series except that Vampires’ Consort a paranormal ménage like its predecessor Shifters’ Captive. We’ll see if people like it anyway.

The next thing I want to do is a Young Adult series about teen girls who get involved in witchcraft and how they learn life lessons through the use or misuse of this magic. If and when I finish that, you won’t see it under the Bonnie Dee pseudonym as it probably wouldn’t be appropriate to expose teens to some of the adult stuff I’ve written.

Thanks for inviting me to chat, Jeannie. I hope people will love Captive Bride as much as I do. Some of my works I reread and think they’re just okay or even ho-hum, but others like this one, I love because it’s the kind of book I would choose to read as a reader.

Jeannie: Thank you Bonnie! Wow, what versatility. I’m glad your imagination wandered over to San Francisco and the Chinese immigrant culture there. Congratulations on the release and I’m really looking forward to reading Captive Bride.

Find out more about Bonnie Dee at : http://www.bonniedee.com