I was hunting out that ephemeral thing called “cool” at the Romantic Times convention last week. It’s one of those reasons you gotta be there–you never know what’s going to be trendy, splashy, and fun until the conference unfolds. My cool hunt was determined by listening to buzz around the conference, the #RT11 tweet feed, and just my own wanderings.

Other than Romance Trading Cards *wink* *wink*, these were the things that tripped the cool meter for me: 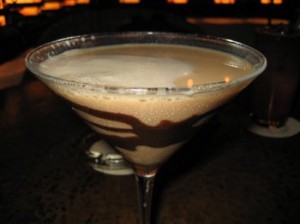 These emerged as the cool drink of the conference. After Susanna Kearsley introduced me to them, I had to limit myself to just one. Drink orders for the delicious, creamy, chocolatey drink started flying left and right and I even went upstairs to my room to see, lo and behold, a mini room service party in progress complete with chocolate martinis and cake.

This was a reader-author meet-up activity hosted by Victoria Dahl, Courtney Milan, and Tessa Dare. I didn’t get to go, but I heard the buzz from several sources. The idea is ingenious in its simplicity — you play the popular board game Taboo with romance terms, trying to guess the *ahem* body parts and other romance-isms from the purple prose equivalents. According to Stephanie Dray, who stumbled upon the session: “It was like I was in a fugue state. There were people yelling and throwing feather boas.”

Way cool. If anyone has pictures or a report from this, would SO love to see or hear from you.

I have to say, after hearing so much about the EC Cavemen, cover models, and the Mr. Romance contestants, I was a bit bummed at how low key their presence was. (Of course, I did miss the Mr. Romance contest. And let me qualify that the ones I met were very nice blokes.) In my little snowglobe of awareness, it seemed that the models were overshadowed by these other notable men attending the conference. I love it when geeks win.

I couldn’t attend either Dean Koontz or Barry Eisler’s talks since I was speaking or at Club RT, but I did get to meet Patrick Rothfuss briefly. And Lee Goldberg’s talk on “How to Tell a TV Story” had me rolling. So I must rely on someone else’s report: Did these non-romance writers hanging out at RT deserve to trip the cool meter? 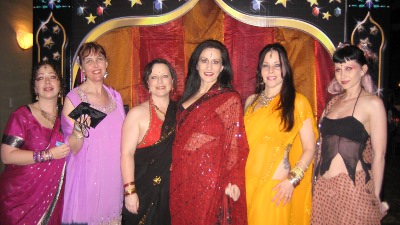 I did miss out on the beginning of the Faery Ball and also the Vampire Ball. However, I can’t imagine any of those could top Ellora’s Cave and their fabulous Bollywood extravaganza.The table decorations were both exquisite and interactive. The chairs were draped with colored scarves decorated with gold disks that doubled as costumes for those of us who didn’t come dressed in saris and wraps. This drew everyone into the festive mood–as if we needed any prompting.

When planning a party, it’s all about the little things. And EC paid great attention to detail. Finger castanets at each place setting, peacock feathers, on the spot henna tattoo artists for a personalized touch.

And to blast the cool meter off the scale, they featured a live Bollywood dance number. Thumbs up Ellora’s Cave! You sure know how to throw a party. It almost makes me wish I could write something for EC, but then again, everyone’s invited to the party, from sweet to steamy. 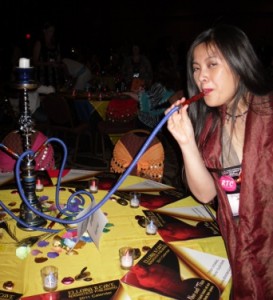 Disclaimer: The hookah is a centerpiece display only. There is absolutely no type of substance being inhaled in this picture other than a big whiff of cool…which I admit, did give me a head rush. 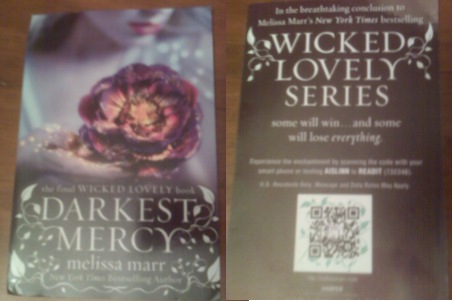 This is the first time I’ve seen anything like this. You can scan the postcard with your smartphone or type in the code online to “experience the enchantment”. We are inundated by a bunch of promo chotchkies and bells and whistles at conference. They’re like those little plastic prizes you win at Chuck E Cheese. Fun for the hour, but not memorable afterwards. Perhaps this was not the most picked up item, but it gets my cool stamp for its edginess and for being forward thinking. Off to research how I might do such a thing…

I really couldn’t be everywhere at once, so help me out. What tripped your cool meter?