Guest spot: Trish Milburn interviewed me for Romance Bandits. The post is up today. Come by and reminisce about what games you used to play

I got my birthday present early from hubby! 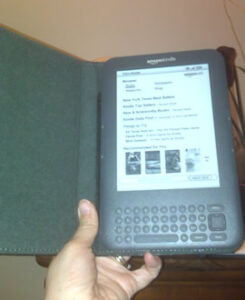 Isn’t she all pretty and shiny? I love my Kindle already. I didn’t need to hook up a single cable to sync it with my Kindle apps on my computer. Yes, apps plural, because I have an app on each laptop so I can read from anywhere. I’ve also downloaded a couple of sample chapters and bought a couple of titles on it. Hubby is happy that I like it, and I think he’s also happy I didn’t ask for the iPad instead which was about three times the price.

One book that I couldn’t find on Kindle was EON by Alison Goodman. No worries because that very same day, a package arrived in the mail from Little Sis. Apparently, we still share the same brain, because she’d sent me a hardcopy of EON for my birthday. 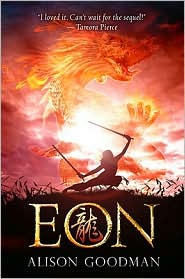 She said she hasn’t read it yet, but had an idea I might like it. How did she know? Just because there’s a woman wielding two swords and a dragon on the cover doesn’t necessarily mean that…Okay, so it was an easy call.

Little Sis said she sent EON to me so I’d have reading material on the plane, but she needn’t have worried. I gushed to her about the Kindle and how tiny it was. No more big bulky books on planes. No more grabbing something from the newsstand in the airport when I don’t have anything to read.

Through a last minute arrangement with the day job, I’m going to be flying on my birthday (Nov. 16) to NYC. Perhaps I can meet up with a couple friends for drinks. I feel so cosmopolitan. 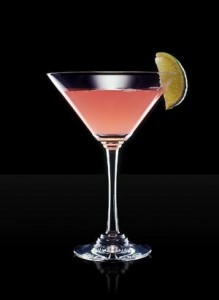 After that, I get a quick stop at home before I head to Nashville for a workshop and signing. I’ll get a chance to visit with my fellow Ruby Sister Kim Law.

That’s a lot of flying for one week, so I’m glad I have my nifty new Kindle. With all the traveling I’ve done in the past, surprisingly I’ve never flown on my birthday before. Hubby said the airline gave him a bottle of wine when he had to fly on his birthday. I don’t know if service is that good nowadays. Maybe an extra bag of pretzels?