I love books. I love science and technology. And I LOVE crafting so when it was time to figure out a unique gift to create for the readers at my table for Barbara Vey’s reader luncheon, I had to combine all that geekery into making steampunk books inspired by my Gunpowder Chronicles series.

But not any steampunk books would do. Oh no. *tee hee*

First, after a round of Youtube and Pinterest research, I settled on a method of creating books that looked old and leatherbound. Now let me tell you, I didn’t just come to that conclusion in an afternoon. There was crumpled paper everywhere and prototypes and and afternoon where I hacked through an entire old book with an Exacto knife. Then decided that was probably overkill.

Now after that was settled, I bought a bunch of empty book boxes at Michael’s. But how to really make them fit the spirit of Opium War steampunk? My research focused a lot on the development of scientific thought and technology in Asia so, what would be better than to feature all those awesome books? (Many of which I couldn’t read, but I could still look at the diagrams…)

So here’s two of the samples. I’ll post the others as I get the descriptions completed:

AND…I also included illustrations from each book inside the box. Like this one for a Ming era fire arrow rocket launcher. 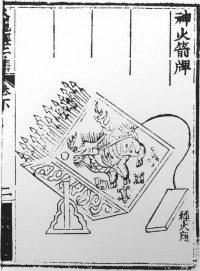 The Illustrated Compendium of Clever Devices 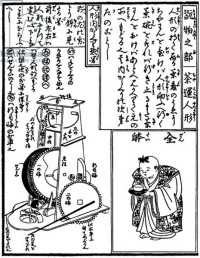 Are they the geekiest crafts in all of geek town, or what?

I have to go now, but will be back to post all the books. There were seven different books in all. Excuse my translations, these were done quickly so I could keep track of them while making the books: