Today is the first day of the Lunar New Year. I was feeling a bit homesick as the new year approached, so I went shopping at the Global Foods.Traditionally, we would have sweets on New Year. And by sweets, I mean a big ol’ platter of candied fruit. Now, you’re thinking…Mmmm….candied fruit sounds good! It’s actually mostly coconut and lotus seeds and a few pieces of yam. The best pieces are the pineapple which you have to snag REAL fast before some cousin gets it.

So I went shopping for a random assortment of more yummy Asian candies. Unfortunately, this led me to regress to my childhood as I went on a bit of a shopping spree. I know everyone’s heard of Pocky, but as a kid, I preferred Yan yan because you get to dip the sticks into frosting yourself. And those lychee jelly things are addictive. I will be sharing part of this bounty with 5 lucky winners. 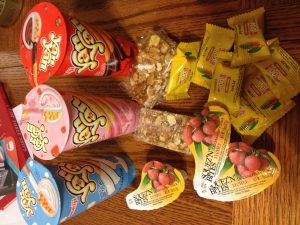 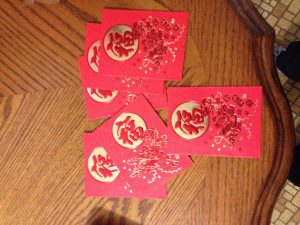 And books! Each winner will receive one of these fabulous fantasy or paranormal books. There’s a nice mix of traditional epic fantasy, urban fantasy, historical paranormal and of course wuxia in there.

I absolutely adore this fantasy series by Inez Kelley and jumped at the chance to be a beta reader for it. The first book (Myla at Midnight) started out with a fascinating premise and worldbuilding and the second book (Salome at Sunrise) added additional layers of emotional depth. Book 3 – Time Dancer is out tomorrow and it really takes the trilogy to a new level, weaving together an ensemble cast from all the previous books and explores the origins and dark side of magic. All the things I love in a great epic fantasy: magic, intrigue, and romance! I was going to give away a copy of Time Dancer, but that doesn’t make sense without the whole trilogy so I’m gifting the entire 3 book set to one lucky winner.

Blood and Honor by Chelle Ang 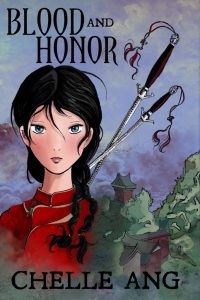 A martial arts adventure in the tradition of “Crouching Tiger, Hidden Dragon” or “Heaven Sword and Dragon Sabre” with legendary swords, secret martial arts skill and two young protagonists, betrothed at birth, but separated. I really enjoyed reading all of the most beloved tropes of the wuxia genre in Blood and Honor. I believe Chelle Ang wrote this adventure in a very accessible way that can be enjoyed by readers who are new to the wuxia (martial arts heroic fantasy) as well as for those who are lovers of the genre and I can’t wait to read the sequel.

The ebook is available for Kindle, Nook and Kobo. 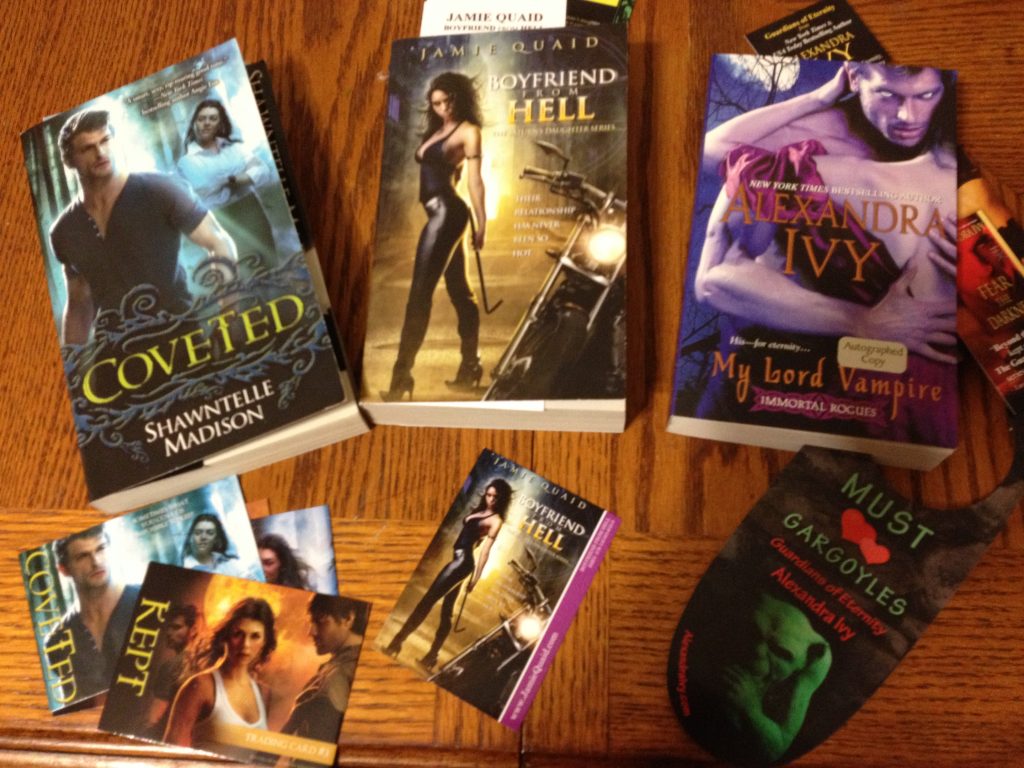 These last three books are autographed print books and come with swag like romance trading cards, bookmarks, and door hangers. One of the benefits of grabbing them at a booksigning. 🙂

The first book in the Coveted series features Natalya, a werewolf with OCD who hoards Christmas ornaments, and her old flame Thorn. Shawntelle Madison is one of my critique partners and I am endlessly agog at how she comes up with her ideas! This urban fantasy series has a cast of quirky paranormal characters from Natalya’s therapy group as well as Natalya’s Russian family (yes, also werewolves). The sequel, Kept, is also available and I happen to know that…tee hee…a novella is coming out in a few months. If you like creative worldbuilding and unusual characters, this book is the ticket.

Boyfriend from Hell by Jamie Quaid

Don’t you love that title? I haven’t read this one yet, but I’ve bought a second copy via ebook so I can relinquish this copy for the giveaway. It’s about a law student who accidentally wishes her boyfriend into hell. Oops! Now she has to get him back while wrestling with a whole assortment of unfriendlies.

From the back cover:

“Much to her surprise, Tina is apparently one of Saturn’s daughters, with the power to wield vigilante justice. But poor Max didn’t deserve to go up in flames, even if he did almost run her over with her own car. Tina’s convinced someone cut the brakes—and now a relentless nemesis is stalking her through the Zone’s back alleys, where buildings glow, statues move, and chemical waste exposure comes with interesting consequences. Tina’s usually a loner, but now she needs a posse like no other: a shape-shifting kitten, an invisible thief, a biker gang, a snake-charming private detective, a well-meaning cop, and her sleazy, sexy boss. But in between freeing Max from hell, saving her own neck, and solving a mystery that threatens the Zone and her newfound friends, how is she ever going to study for finals?”

My Lord Vampire by Alexandra Ivy

This is the first in her Regency paranormal series. I’ve read a few of her Guardians of Eternity books, which are contemporary paranormals complete with vampires, weres, demons and a little gargoyle! We got to chat a bit about the gargoyle and his love interest today. I do love speaking to authors about their stories. The blurb of this one sounds nice and Dark Shadow-y.

Use the rafflecopter widget below to enter. I’ll draw next Sunday.

Wishing you good health, good fortune and all that you desire in the new year.