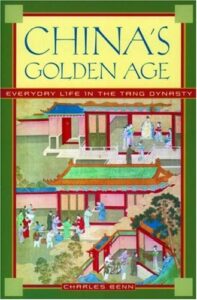 I always research in stages. First, I do some preliminary research before I start drafting. Then, once the work is done and I’m waiting for beta readers to comment (like right now), I research deeper into the areas of the book I know need to be fleshed out.

This last one has been quite an adventure! On a suggestion from some of my Tweeps, I thought I’d share for any history geeks out there.

First off, I looked into a diplomatic practice called heqin, or peace marriage. I explored several academic writings on the political role of the heqin brides as well as what sort of women were sent to foreign lands in these peace marriages. Everyone always thinks of China as being historically closed off, but in truth the Tang Dynasty was one of the most open periods in imperial history. Foreign relations with Korea, Japan, Tibet, Central Asia and all the neighboring kingdoms were at their height and the Tang empire had the most frequent use of peace marriages as a diplomatic option.

Then of course there was more research about Changan and the layout of the East Market, the North Hamlet, and the Administrative City. I went to my fallback book by Charles Benn as well as a few other resources.

Archery, which was implemented as part of the military exams during the Tang Dynasty, also played a key role.  There were spectacular sporting events organized around archery called the Great Shoots. Nifty, huh?

And now I’ve bought entirely too many history books in order to delve into the political structure of the Tang government with its six ministries and a gazillion other offices. Talk about bureaucracy! I’m salivating to get my hands on Charles O. Hucker’s A Dictionary of Official Titles of Imperial China, but am making do with the Google Books preview currently as I try to search it out.

China’s Imperial Past: An Introduction to Chinese History and Culture by Charles O. Hucker

The Open Empire: A History of China to 1600 by Valerie Hansen

And a final impulse buy because it’s an academic book by Van Gulik of Judge Dee fame:

Those automatic recommendations on Amazon will be the death of me.