First, be forewarned that I used to live in Southern California and even more specifically, the Los Feliz and then Burbank area. This makes me a very bad photographer of things that might be interesting to a non-Californian. Amanda Berry is likely to have much more interesting photos of our sightseeing.

After a day of Amanda gripping the “oh sh#@” handles while I drove through L.A. traffic, we decided it would be best to take a Hollywood tour and let someone else drive. We jumped on one of those tour buses (really more of a truck) on Hollywood Blvd and the day commenced. 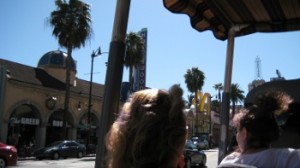 Growing up here, I was really amused to take a star tour for the first time. They took us up into the Hollywood hills to see the measly single-digit million dollar homes before we hit Beverly Hills to check out the really schwanky places.

I can’t really remember whose house was whose, but Amanda got in a lot of good research for her Hollywood stories. I mean, just think of setting as character. A home can say a lot about a Hollywood hottie. Is it covered with hedges with only a gate showing? Is it aloof and set upon a hill? 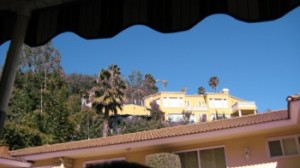 The tour guide was quite pleased that we were romance authors. Apparently Fabio is common sighting during such tours, rumored to drive an orange Lamborghini. I kept my eyes peeled. No luck.

After the Hollywood tour let us out, we took our own tour of the Beverly Hills Hotel – aka the Pink Palace. After a lot of circling and feeling conspicuous in my mid-size rental among all the sports cars and foreign imports, we finally got brave enough to park and wander in.

The good thing about nice hotels is they can’t kick you out even if you’re roaming around like gawking tourists. Service, you know? Though we played it quite cool, keeping our picture taking to the privacy of the gilded bathroom. 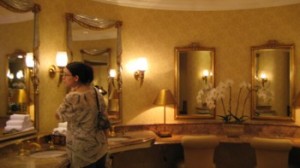 Then following the rule that no one is ever out of place with a drink in hand, we went to the 1912 bar to watch the sunset.

In my weakness for the fugitive value of specialty drinks, I ordered something called a “Smoky Ginger” which was really quite good: ginger infused gin, house-made honey syrup, a bunch of other ingredients I didn’t recognize…I liked it. 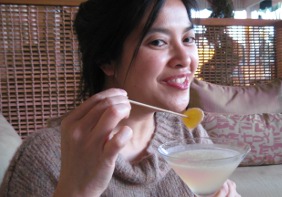 And Amanda celebrated the occasion with her first sip of alcohol in six years. Let me tell you that Amanda Berry is a very, very cheap date. 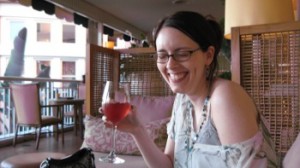 Well, unless you’re drinking at the Beverly Hills Hotel where no date is cheap, I suppose.

We attempted dinner at Ketchup, a site Amanda had researched for one of her Hollywood stories. Unfortunately it was closed and they appeared to be filming upstairs. Perhaps for the movie version of “L.A. Cinderella”? (one day…one day)

We settled for dinner at Mel’s Diner across the street where we spent our quarters on the mini-jukeboxes and I had my favorite hanging out dinner, which is breakfast.

The conference unofficially starts today with the RT Book Camp. Time to put on my game face.