Now that it’s all done, it felt like just a short little hop over there. Most of the vacation was spent with me and hubby walking the streets and taking in the sights — and of course gazing into each other’s eyes. You have to get over real quick the dollar to Euro conversion and how much everything costs! (Okay, not quite over it as you can see)

Favorite memory would have to be the farmer’s market in Amsterdam on Saturday morning. We stopped into a little shop and bought a bottle of absinthe afterwards. I’m surprised I didn’t have any pictures of the market. I’m hoping hubby’s camera has a couple. In the meantime, here are some highlights:

My favorite of our two destinations. There’s just so much to do and see! 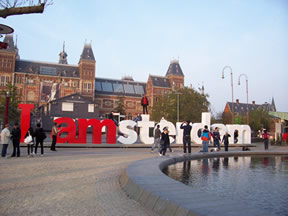 In the park outside the Rijksmuseum

We stayed in the Park Hotel right next to the Rijksmuseum in Leidseplein. There’s a current “I Am-sterdam” campaign going on as you can see here. It’s also on T-shirts and in all the souvenir shops.

There’s just something about the network of canals that makes the city so charming. All the tulips were in bloom too. I was quite amused by a display of iguana sculptures in a flower bed. Hubby tolerated me posing him next to one of them.

Hubby beside the iguana sculptures

We had dinner one night in a restaurant called “In de Waag” which is in an old weigh station. Anatomy dissections had been performed at one time in the theatre upstairs and the restaurant was lit by over a hundred candles (plus some help by modern lighting). I loved the medieval feel of it.

The restaurant is lit by over 100 candles

You’re not supposed to take pictures of the windows in the red light district, but I tried to get a shot of the red lights along one canal. The picture turned out blurry, but it makes an interesting abstract. 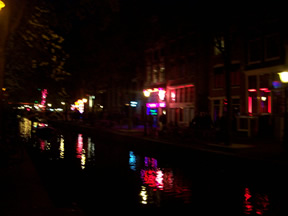 I felt like we walked all over the city center! Cobblestone streets are quite tough on the feet. The highlight of this city had to be the smell of fresh waffles and chocolate that you would occasionally get as you walked through the shops. It’s definitely an eating town — restaurants, cafes, chocolate and waffles everywhere!

At dinner one night in a restaurant called “Falstaff” I tried to order the mussels, but the restaurant said they were out of season. (Hey, I saw tourists eating them up and down restaurant row! I guess those places will stoop to anything.) Instead I ordered the shrimp “a la Marsellaise” which turned out to be my favorite dish of the vacation. Hubby was less adventurous and ordered what was essentially mac and cheese.

Cookie bar at the Cafe Gourmand – They give samples!

The place to be is the “Grand Place”, a square surrounded by the Hotel de Ville, the Grand Palace and a ring of stone buildings each representing one of the main guilds. The expanse of it is difficult to take in with one camera shot. We spent some time deciphering the buildings based on their decorations. Hubby was always fascinated by the baker’s guild being a baker himself in his youth.

The Grand Place — center of the old city. Everything radiates out from there.

I missed grabbing a cone of fries in Amsterdam, so I made a point of doing it in Brussels. Ketchup tastes different there and costs extra. 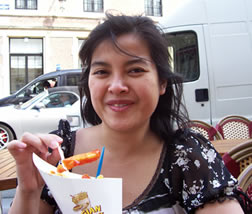 Frites in a cone

By the time we hit Brussels, most of the pictures were on hubby’s camera since I didn’t bring the cable for mine and started running out of space on the memory card. We, of course, have the requisite photo of the Mannekin Pis.

I’m not ashamed to say that some of my fondest moments were simply laying in bed in the hotel and watching the brainy French gameshow “Des Chiffres et Des Lettres”. Hubby and I would try out the word puzzles by trying to make English words even though the show was in French. The math puzzles were just off the hook! A woman named Christiane was kicking everyone’s butt. She’s an absolute savant at it. A French Ken Jennings.

In summary, spent a lot of money, felt like out of place tourists for a lot of it, soaked in some great sights and ate a lot more than I should have. For me a vacation is about the little things. I love how much hubby agonizes about finding a perfect magnet from each place we went and I was tickled pink by how every time you order coffee in Europe, you get a little biscuit or sweet with it. I think that’s a practice we should definitely adopt here in the states.