Win a Kindle Fire! The Harlequin Historical Authors Holiday Giveaway is back. In the spirit of an Advent calendar, the authors are giving away daily prizes and a Grand Prize of a Kindle Fire. Play every day for more chances to win.

Each participating author will have an activity planned on their website for their special day. You may be asked to comment on a blog, find an ornament, or visit a Facebook page. For each day you participate, your name will be entered into the Grand Prize drawing. At the end of the month on December 23, one day from the calendar will be randomly selected. One of the entrants from that day will then be randomly selected to win the Kindle. The more days you visit, the better your chances!

I’ll be jumping in at the end on Dec. 22 with a special holiday giveaway.

For international readers: THE PROMOTION IS OPEN TO U.S., UNITED KINGDOM, IRELAND, CANADA, AUSTRALIA, NEW ZEALAND, AND EUROPEAN COUNTRIES WHERE A KINDLE MAY BE SHIPPED. 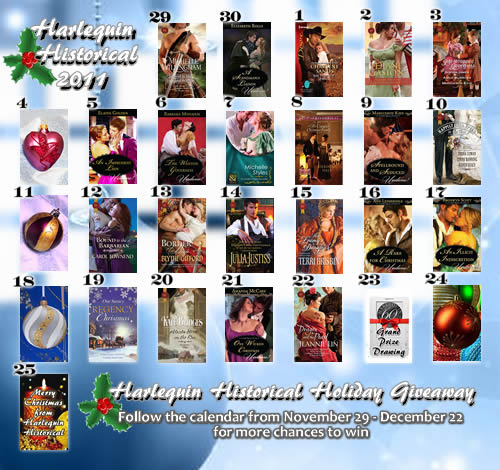