It’s three months until the release of MY FAIR CONCUBINE (May 22 – print, June 1 – ebook) which means about now is when I get antsy wondering what my next cover is going to look like.

The joke in the industry is that we, as authors, fill out all sorts of detailed story information to help the publisher come up with the cover. Then marketing just ignores it and puts whatever they want. I have no reason to complain as the cover gods have been quite kind to me, but I thought it would be fun to let everyone in on the “guess my next cover” game.

So, I’m going to provide the information I gave to Harlequin regarding MY FAIR CONCUBINE. You’ll guess what the cover will look like. Closest guess gets an advance autographed copy of  My Fair Concubine. Best guess — meaning the concept I like best that didn’t make the actual cover — will also win a copy.

For Harlequin, we actually have a detailed Art Fact Sheet website where authors are supposed to input story summaries, character descriptions, themes, scenes, links to relevant pictures, the works. It’s quite detailed. Sometimes your editor goes in to input the info, but it’s supposed to be the author’s responsibility. For My Fair Concubine, the team began working on the cover early so my editor gave them some details and they gave me a list of questions.

Chang Fei Long has been called back home upon the death of his father to learn that the family is swimming in debt. Before his death, his father arranged for Fei Long’s sister to become an alliance bride to regain favor with the imperial court. When Pearl begs for mercy, he can’t bring himself to force her into marriage and exile to a barbarian land. As a result, he has to come up with another false princess to go in her place.

Yan Ling is a servant at the tea house where Fei Long goes to brood about his troubles. When she mistakes his musings as a proposition for sex, she dumps a pot of tea on him and gets thrown out into the streets. Now homeless and destitute, Yan Ling begrudgingly accepts Fei Long’s offer to train her as a replacement princess.

This lighter look into Tang Dynasty culture takes place in the capital city of Changan, going from courtyard mansions to the infamous entertainment district to the seedier parts of the city. In an homage to the classic story of My Fair Lady, Fei Long and Yan Ling are joined by a clever maid and a flamboyant actor as they work to fool imperial rivals and navigate the complicated landscape of their growing attraction.

My editor asked for some reference pictures and I sent her some of the pictures that I had used for research. Also I let her know that I used many visual references from the movie “House of Flying Daggers” for the hero.

And some additional info the art department asked for with my answers:

Ø Specific colour description of heroine’s robe
Ø Is it a kimono type robe?
Jeannie: The robe looks very similar to a kimono, but less elaborate and more wearable and mobile.  Hanfu robes were actually the style that inspired Japanese kimono. The best examples of authentic Tang Dynasty robes can be found here:  http://www.chineseclothingonline.com/index.php?cPath=1_116_21&name=Women%27s+Custom-made+Chinese+Ancient+Costumes

The hanfu is always folded left over right. The more revealing styles with bared shoulders or neckline are for song girls and courtesans. (ex: WHF-049). Young ladies of noble birth in the capital would wear something loose and flowing often mixing a lot of layers and colors. (ex. WHF-059)

Ø What type of sword is the hero carrying?
Jeannie: The sword is a straight-bladed Chinese jian. Considered the gentleman of swords, it’s the one most likely carried by an officer and a nobleman. (see picture)

Ø What would a squad captain wear?
Jeannie: Soldiers are often depicted in armor, but that may not be realistic for being off the battlefield. I included three reference pictures. The drawing is a bit closer to theater costume which is often exaggerated but I hope they help to give an feel. (see pictures) 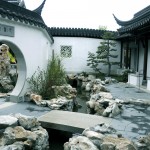 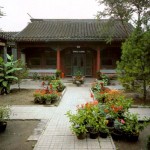 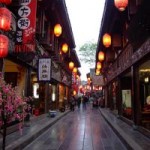 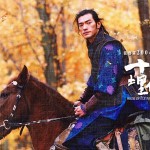 From House of Flying Daggers – hero on horse 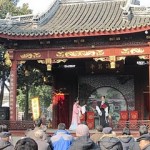 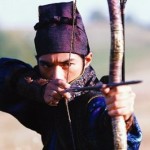 From House of Flying Daggers – archer 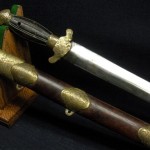 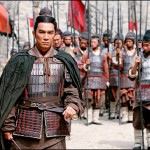 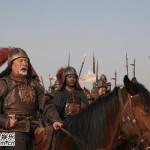 Note: In my mind, I actually had Takeshi Kaneshiro (House of Flying Daggers, Red Cliff) in mind for a secondary character, Li Bai Shen, but hey…he’s not bad hero material either.

All of this has me expecting a pretty kickass cover…but you can never tell what the final version will look like. So join me in the waiting game and guess my next cover.

Comment and let me know what you think will be shown on the cover. Will both the hero and heroine be shown? How will they be dressed…or how undressed will they be? *tee hee* What will the color scheme be? What about the background?

And oh yes, will the hero have a whole head? Half a head? Or no head at all? 🙂

Closest guess and best guess wins a copy of MY FAIR CONCUBINE when I get my author copies a month before release.

Contest ends when my cover is revealed, which I’m hoping for within the next two weeks. *giddy*