March Madness time! It’s time for Excerpt Monday. For those of you who are new to it, check out the details on the blog: Excerpt Monday. All are welcome, published and unpublished.

Of course I also double booked myself. I’m over at Unusual Historicals blogging about The Art of Chinese Calligraphy. I should have consulted Cindy Pon whose the brush painting artist — but instead I did some research and found some really intriguing information about it that’s actually quite useful for my manuscripts. Come see if you have time (it goes live after 5am) :  Arts and Music: Chinese Calligraphy

By the time we reached Akasaka station, Scott popped the question. “So when are you leaving?”

“I go back to Seoul tomorrow night.”

We had slowed our steps and pedestrians flowed by on either side of us, all dark-haired and golden skinned. I could blend in and look exactly like one of them. Then again, I couldn’t.

“Well there was the tea ceremony.”

We both chuckled at that.

“Nothing big. I just like to look around.” I shrugged. “I heard the Tokyo fish market is a must see.”

I had a once in a lifetime chance to visit Tokyo and my big plans were to sleep in a capsule and visit the fish market. Thankfully, Scott didn’t laugh at me. He shifted the backpack over his shoulder and looked thoughtful. His short brown hair fell carelessly over his forehead. I liked that. I still do.

“If you want, we can meet here tomorrow morning and take the train,” he offered.

Then he paused. That pause told me things. There was a slight catch in his breath as he waited for my answer. My heart started pounding.

It wasn’t a date. It was too easy to be a date. We both played it out that way. We agreed to meet at nine and then he disappeared up the escalators into the station. Casual. Friendly.

I wasn’t expecting to meet up with Kent and Mari-san for another several hours and it was too early to check in, so I wandered around looking inside shop windows. With Scott gone, I was enclosed in a bubble of silence. I knew about ten phrases in Korean. In Japanese, that number was more like three. I didn’t realize how much I’d miss the chit-chat until small talk became impossible.

That was the hardest thing about this consulting job. The people in the office spoke enough English, but every single exchange was hard work. After hours and on weekends, I was left on my own. I had to translate prices in my head, carefully work out each question and listen carefully for answers where only every third word made sense.

Most of the time I didn’t mind being lost and wandering. It made me appreciate what my family must have gone through when they had first come to the U.S. My grandmother was a tiny little bird who only knew about five words in English, but she’d go anywhere and do anything. She was fearless. I decided to take the train to Shibuya Crossing. I could be fearless too. 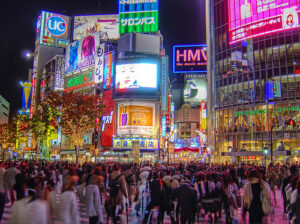 I emerged from the station beneath the glow of three massive digital screens. There is a phrase my mother uses: As bright as the day. The neon glare of Shibuya was as bright as the day. I became nothing but an anonymous speck, caught in an onslaught of people coming from all directions. If I didn’t move, I’d be trampled underfoot. So the tide  dragged me forward while the lights flashed overhead. This was Times Square multipled by ten.

I had this nagging feeling that I should be doing something to make the most of this experience, but I had no idea of where to go or what to do. In the end, I didn’t go into a single store on Shibuya Avenue. I let the crowd carry me while I absorbed its energy, taking in every sign, storefront and restaurant. There were so many images and everything was in startling colors; red, yellow, electric blue. Billboards and icons and moving lights shouted at me. Maybe this was what advertisers had to do to get anyone’s attention in such a densely packed metropolis.

I floated along feeling cosmopolitan for being here and, at the same time, completely clueless. The details fail me. All I remember was the crowd and the lights. I remember feeling as if I had somehow been transported into Blade Runner. I stood there, with the heart of Tokyo beating around me, and it was like nothing else in the world.

So, to kick it off, your hosts: