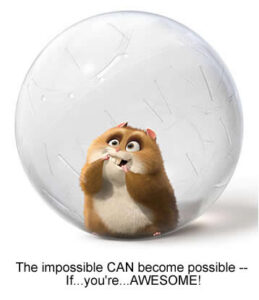 I’ve been a lot less avid about checking my website stats since my webmistress Liz took the site of StatCounter. (Thank you Liz. I might not have gotten those two manuscripts whipped into shape if it weren’t for you!)

But I still check the new SiteMeter stats once in a while to see what’s bringing people to the site. So far, the most referrals come from queries for “Jeannie Lin” or “Butterfly Swords” which, frankly, still makes me giddy every time. But the second most frequent referral comes from a link on Google images to Rhino.

I just saw the cartoon again last night and I do love the little creature. His wild, frenetic enthusiasm is unstoppable. So should I use this conincidence of events? Cross-promotion opportunity? Rhino the Kung Fu Hamster. Hi-ya!

There is definitely one part of me that is channeling Rhino right now. The part when he’s anticipating finally getting out of the trailer park to become a superhero alongside Bolt: “Let it begin! Let it begin!”