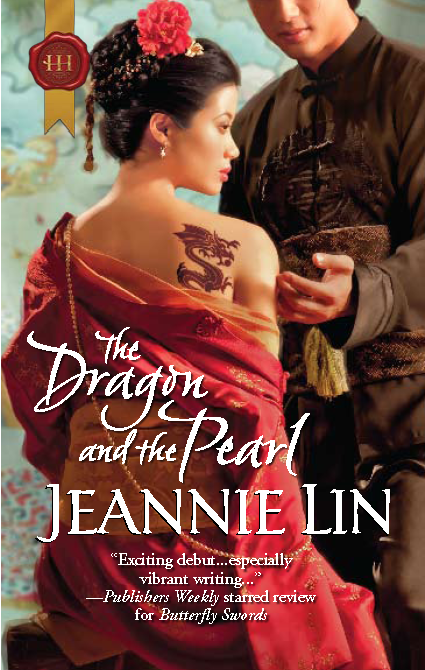 I was remarking on Twitter how my mum seemed to disapprove of the girl with the dragon tattoo (snicker…okay, that title was taken obviously) on my cover. I’ve read comments on Asian blogs on how it’s disconcerting or even seen as disrespectful that so many Westerners are using Asian motifs and Chinese characters for tattoos because it seems like a cool thing. Not all Asians feel this way, but I did feel I should make a cultural note of it.

In many Asian cultures — Japanese, Chinese, Vietnamese, and others I’m not aware of — tattoos are historically associated with a criminal element. This is not unique to Asian culture as in Western culture, tattoos are also tied to a sub-culture of subversiveness. However, I think it can be safe to say that in American culture, that taboo has been diluted almost completely and there are only faint echoes of it. People with tattoos are for the most part accepted in Western society and with temporary tattoos and tramp stamps and cute little Tweety bird tattoos all over, tattoos have been somewhat normed.

To give an example of the flip side of things, my friend from Texas has a tattoo of an American eagle and the flag on his upper arm. In Japan, they wouldn’t allow him into any public baths or spas. If he were to show that tattoo in a business setting, they would lose respect for him despite the fact that he’s obviously not yakuza. He’s a big Texan who’s proud of the American flag. Though I can think of certain situations here in the U.S. where it may cause raised eyebrows to expose a tattoo, I don’t think it carries the same stigma and repercussions.

From the romance front, tattoos are all over paranormal romance and urban fantasy on men and women as we can see the number of covers that sport a tattoo. 🙂

I do want to remark that I considered the use of tattoos in my historical romance very carefully and tried to retain the cultural taboos around them in THE DRAGON AND THE PEARL. Tattoos are the mark of criminals and outlaws. They’re a signal of dishonor. I was surprised to see the tattoo appear on my heroine on the cover and can’t deny that it does look pretty cool. The intent in the story was for the marking to be recognized as a symbol of something dark and criminal and not to be taken lightly, but I can’t get away from the fact that the story may exploit the “cool” of it in Western culture though it was not my goal to do so. Any disrespect was unanticipated and unintended.

Some trivia — I’ve read that the craze for Asian tattoos may be tied to the influence of Water Margin/ The Outlaws of the Marsh. The classic novel is set in the Song Dynasty features an outlaw with mult-colored tattoos of nine dragons on his back.